On folio 212v, we observe the presence of several diacritic signs looking like the sign +. In the Greek column, we find one:

and in the Arabic column, the sign occurs 6 times: 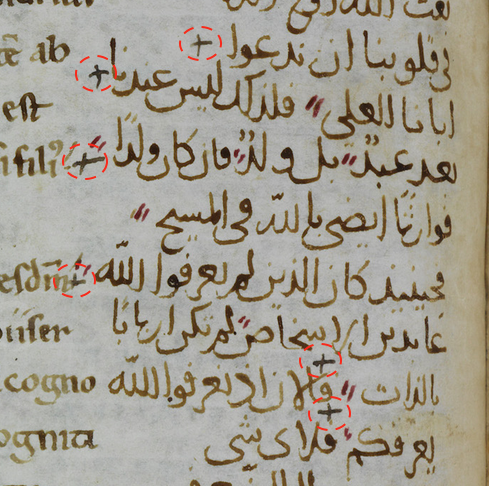 We wonder about the signification of this symbol. In other places of the manuscript, it is used to indicate in the body text where to add additional readings or corrections written in the margin. For example, here in folio 179r: 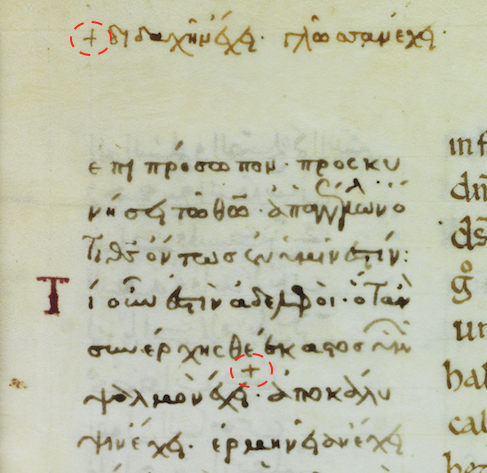 Sections of the verse 1 Cor 14:26 are missing. διδαχὴν ἔχει and γλῶσσαν ἔχει are then written in the upper margin and the sign + indicates (with approximation in this case) where this reading should go. There is, for now, no such example in the published folios but it does happen quite often.

In the case of folio 212v, nothing is written in the margin. So, what is the meaning of the repetitive use of + in this case? The only alternative use that we can imagine here is that the scribe or more likely a later reader wants to draw attention to the differences that the Arabic translation shows in comparison to the Greek text.

Line 8 contains parts of Gal 4:6 (And because you are children, God sent out the Spirit of his Son into your hearts, crying, “Abba, Father!” [WEB]). We read in the Arabic ان ندعوا: "that we call (our father)". This differs from the Greek and the Latin, which have a participle κράζον/clamantem, meaning that the heart is crying. In addition, in line 9, the content of the cry is ابانا العلي "our father the Most High". The qualificative العلي is an addition to the Arabic translation and is notably one of the names of God in Islam.

Lines 9-10 contain the beginning of Gal 4:7 (So you are no longer a bondservant, but a son [WEB]). The Arabic wording ليس عندنا بعد عبدٌ بل ولدٌ  "there is no more a servant among us but only a child" diverges from the meaning ὥστε οὐκέτι εἶ δοῦλος ἀλλ᾿ υἱός "you are no more a servant, but a son". This choice in the Arabic text probably originates from the Latin reading that has est instead of es: itaque iam non est servus sed filius. This reading is the one present in the Latin column and in most of the Vulgate witnesses. Yet, عندنا "among us" is an addition to the Arabic text.

Line 12 (and 13) contains 4:8 (However at that time, not knowing God, you were in bondage to those who by nature are not gods [WEB]). Contrary to the Greek text and its 2nd-person plural formulation, the Arabic text uses a 3rd-person plural formulation: كان الذين لم يعرفوا الله عابدين الاشخص "those who do not know God are servants of the statues". This translation can also be explained by the Latin Vorlage. In fact, the Vulgate has 3rd-person plural verbs: quidem ignorantes deum his qui natura non sunt dii serviebatis,

The hypothesis that the + symbols are placed here to point out these differences between Greek and Arabic texts is supported by the fact that the only + in the Greek column is at the end of the vers 4:8, the last one with special readings.

However, we see that there are still two last + in the Arabic column: in line 14, framing the word فالان above and below. This line does not present a particular text and we can not explain the function of the + here.

I would be very interested in your opinion: is my hypothesis that the + symbols are used to highlight differences in the Arabic text plausible? Do you have any idea about the last + in line 14?