Keep up with HumaReC research !

Today we have released a new version of our manuscript viewer!

Our viewer is based on the tool EVT, an edition visualization software designed to create a manuscript viewer with a user-friendly interface from XML TEI-encoded texts. Last year, we migrated our viewer from EVT 1.1.1 to EVT 1.2 (see our blog post about it). This release supported new TEI elements, including the column breaks <cb>.

First, we decided to keep a viewer displaying one column and offering the possibility to scroll between the three column: 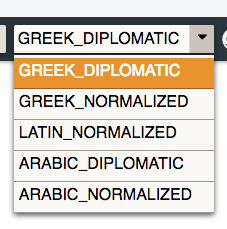 We did it mainly for readability reasons. In fact, it was then too much text in the text window and lines were often breaked.

However, displaying the three columns next to each other seemed us to be more accurate, reflecting better the layout of the manuscript. To improve the readability, we enlarged the text window:

In addition, we added an option already present in EVT, a full-text mode. You just have to click on

An other important implication of this update concerns also the XML encoded files. Previously, the three columns – and so the three languages – were encoded in separate files. Now, all columns are encoded in the same file, which represents better the object. In addition, we are now encoding each letter in separate files (see our github repository). These changes allow us to get closer to the standards in the field as described by the IGNTP guidelines for XML transcriptions of New Testament manuscripts.

A few adaptations in the EVT tool were also made our needs regarding the three languages. We thank the EVT team for its helps in this transition!

We hope that you enjoy this new visualisation and do not hesitate to give us feedbacks in the comments!